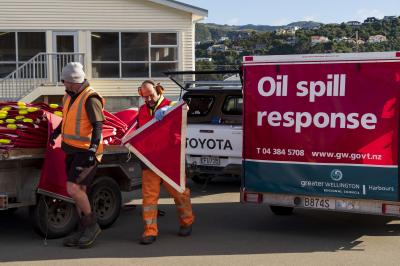 Staff from across Greater Wellington geared up to take part in an oil spill response exercise at Island Bay.

Staff from across Greater Wellington Regional Council geared up to practise protecting our harbours and wildlife in the event of an oil spill last week.

An oil spill response exercise, led by the Harbours team was held in the former Island Bay Surf Club last Thursday. Attendees who were originally trained by Maritime New Zealand got revalidated while scientists carried out wildlife assessments.

Greater Wellington Harbourmaster Grant Nalder set a scenario, where a barge spilt 250 litres of waste oil into the bay overnight.

"We're in a marine reserve so our job is to clean the spill and stop it from spreading further. First of all we would patrol the area where the oil has washed up, secure the site and set up a decontamination station," Grant explained.

Maritime NZ assessed Greater Wellington's overall response to the scenario while Friends of Taputeranga marine reserve representatives were there to learn more about oil spill response.

The harbours team pulled out a selection of the equipment, including skimmers to remove oil from the water's surface and booms which are barriers used to contain oil or reduce the possibility of pollution to high-risk areas.

"For each litre of oil spilt it creates about 10kgs of waste. To clean an oil spill would likely include a combination of some or all of our harbours, parks, environmental protection, and flood protection teams," Grant says.

Senior environmental scientist at Greater Wellington Roger Uys was there to do a drone trial to carry out a beach reconnaissance flight and see what wildlife species would be most at risk.

"Using a drone is a safe way to check off-shore islands and dangerous rocky sections of the coast for affected birds. This way we won't have to send people out in boats in the middle of a spill."

Roger says there are many bird species of conservation concern, with the most likely birds to be affected being At Risk: Nationally Declining red-billed gulls which have a large population in Island Bay.

"Little penguins often come into that area too so we have to watch out for them, as they are one of the species likely to get caught up in oil."

In the event of an oil spill Greater Wellington would work with the Department of Conservation, local iwi and other local groups.