This is one of our most popular parks - a great place for a day out with family and friends on the Kāpiti Coast.

Daily from 8am until sunset

The road has been temporarily closed as it has become unsafe for vehicles to drive on due to erosion. In the meantime we will be working on a safe temporary solution so we can open it again as soon as possible. This area and road are part of the QEP Coastal Retreat Plan and will be addressed as part of that in 2023/24. For further information please contact 0800 496 734. 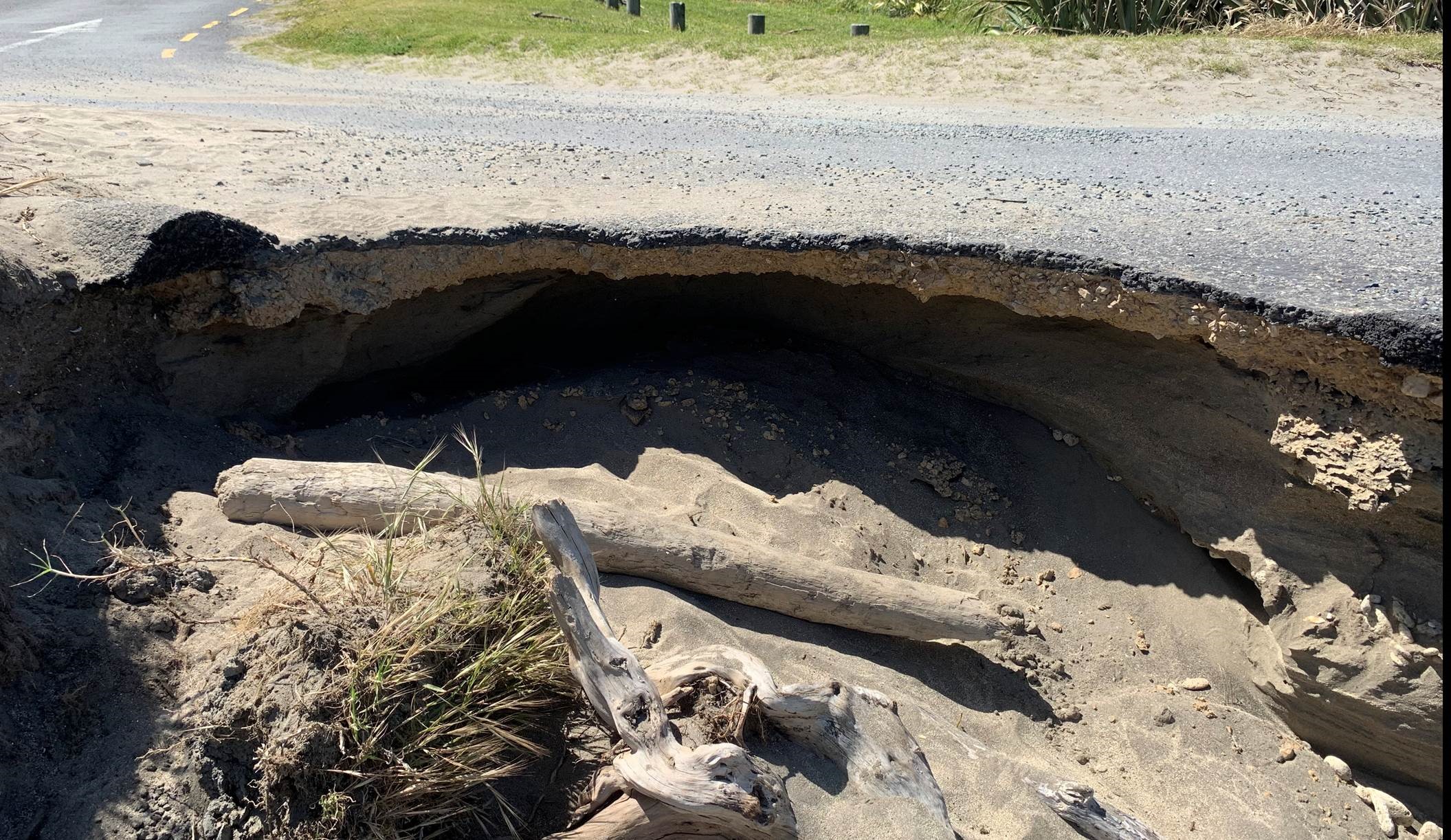 Greater Wellington is rebalancing equestrian recreation in Queen Elizabeth Park, ceasing most horse grazing in favour of expanding casual horse riding and trekking facilities while implementing its policy of restoring the natural environment of the park.

The move brings high intensity commercial grazing, that has significant and unsustainable environmental impacts in areas such as rare wetlands and fragile dune lands, to an end.

The northern section of this track is closed due to coastal erosion between Raumati South and just before Whareroa Stream, as marked on the trail map.

Daily from 8am until sunset

Queen Elizabeth Park has a variety of different trails and most are suitable for pushchairs and wheelchairs.

Each track offers a different experience - around wetlands, through dunes, amongst kahikatea forest remnants, across paddocks, or beside the coast and passing historical landmarks.

Most tracks are shared with either cyclists, horses, or both, so be aware and take care.

The Te Ara o Whareroa trail runs from one end of the park to the other, connecting Paekākāriki with Raumati South.

It's the perfect place for a family bike ride as the track is sealed, making it accessible for all kinds of wheels, and easier for little legs.

There are a number of other tracks available to cyclists. While these are not sealed, they aren't necessarily designed for die-hard mountain bikers, and instead would be suited to recreational riders, families and those wanting to take it easy and admire the view. 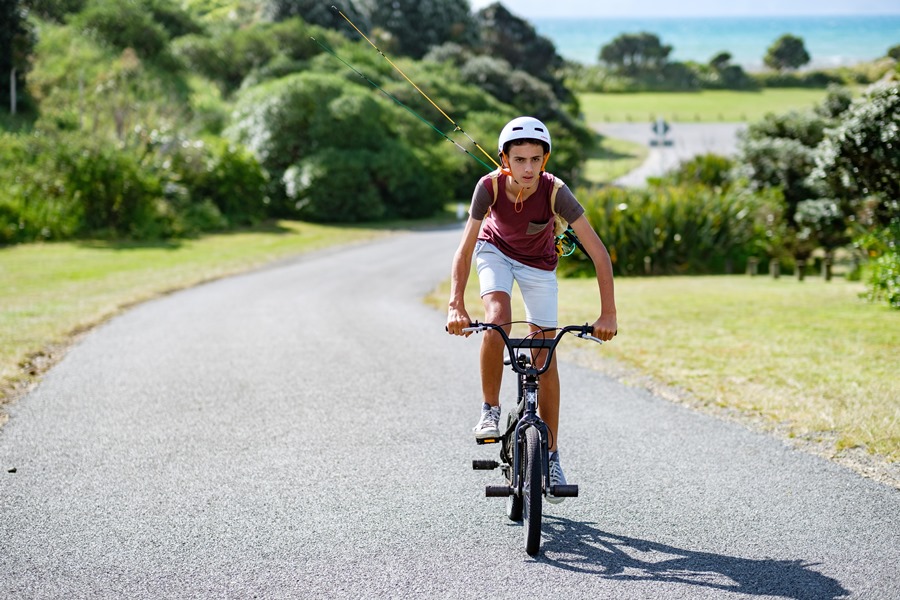 Dogs are welcome in all parts of the park, except for the Te Ara o Tipapa Loop and Dune Swamp Loop. While dogs are not required to be on a lead, please keep them under control and pick up after them at all times.

Queen Elizabeth Park is a lovely spot for horse riding, with easy trails over farmland and good access to the beach. There is also plenty of space to park horse floats.

Things to think about

Horse riding is allowed on multiple tracks in the park. You can also ride in the neighbouring Whareroa Farm where there is a good range of riding tracks.

Horses are permitted on all Kāpiti beaches with restrictions on beach urban areas during summer. You must ride your horse in a safe and careful manner when on the beach. Keep your horse out of the dunes, as these areas are fragile and contain breeding birds and erosion-control plants.

Queen Elizabeth Park is the home to Wellington Eventing - a discipline in horse riding where riders compete across three events (dressage, show jumping and cross country) over a day or more. In each event a rider can earn penalties, and at the end of the three events, the rider with the least penalties wins.

Eventing is an area of horse riding that New Zealand has excelled in with numerous Olympic and world championship successes. For more information on Wellington Eventing competitions held at Queen Elizabeth Park see NZ Equestrian.

So much of the work done in the regional parks wouldn't be possible without the help of people in our communities. If you want to contribute to the care of Queen Elizabeth Park, you can join one of our community groups.

Queen Elizabeth Park and the land it sits on has long attracted people to the area.

Māori have been living here for hundreds of years and there were major settlements at Wainui and Whareroa up until the mid-1800s.

At the beginning of the 19th century, the Kāpiti Coast was occupied by the Muaupoko and Ngati Apa peoples. Over the 19th century there were a number of raids and resulting battles that brought other tribes to the area, including Ngapuhi, Ngati Toa, Ngati Whatua, Waikato and Maniopoto.

The land where Queen Elizabeth Park now sits was an important area. The waterways between the sand hills were deep and plentiful, and it was said that canoes could be paddled from Paekākāriki to Waikanae.

From the 1830s onwards, European ships, including whaling boats regularly moored in between Kāpiti Island and the coast, as it was a sheltered place to settle.

Local Māori gradually left the area and European settlers farmed there. Land was cleared, the wetlands between the sand hills drained and pasture sown. From the 1840s the beach formed part of the main road north, with many travellers stopping overnight at Whareroa.

Communication routes improved further and the railway line between Wellington and Foxton was completed in 1886. By the turn of the 20th century, the beach highway was still providing access for the beachfront sections being developed in Raumati and Paraparaumu.

The history of this area is rich and complex. For more detailed information, see the QEP Resource Statement (PDF 2.8 MB) .

Between 1942 and 1944 you would have been forgiven for thinking Queen Elizabeth Park had been taken over by Americans, because we had!

During those years over 15,000 American troops were stationed at Queen Elizabeth Park (then Camp Russell), Whareroa Farm (then Camp Mackay) and Paekākāriki Village (then Camp Paekākāriki).

When World War II broke out in 1939, New Zealand gave total support to Britain and sent our army to the Mediterranean. By 1942, Singapore had fallen and the South Pacific was under threat by Japan.

New Zealand agreed to leave its army in North Africa, and so the United States Marines were sent to New Zealand to prepare for the possibility of a Pacific War and protect the country from an invasion.

Training took up a lot of the troops' time. The land around the camps was used for live firing exercises, and there were 24km route marches up Paekākāriki Hill Road (known as "Little Burma Road" to the marines), as well as exercises on the Tararua Ranges.

One training activity ended in the deaths of 10 sailors.

On June 20, 1943 there was a beach landing training. They were practising for assaults on the Japanese occupied Pacific Islands. Everything seemed to go wrong during this exercise.

One boat, named the "beach party" was supposed to be the first onshore and the last to leave the shore during the exercise. Their job was to prepare the beach for the 1,600 marines to follow them. This boat had 25 men on board.

During the exercise the tide stranded the boats on the beach, while the weather hit them with freezing cold rain and strong winds and a rising surf.

As the last boat off the beach, the beach party didn't leave the shores until after nightfall. When they finally did get to the water their engine woudn't start so a larger boat towed them out stern first (backwards).

The waves crashed onto the boat and because the boat was backwards it couldn't ride the waves, instead they hit it and went over it with force. When they were still a good distance from the ship, the boat capsized, throwing the 25 men into the freezing sea. 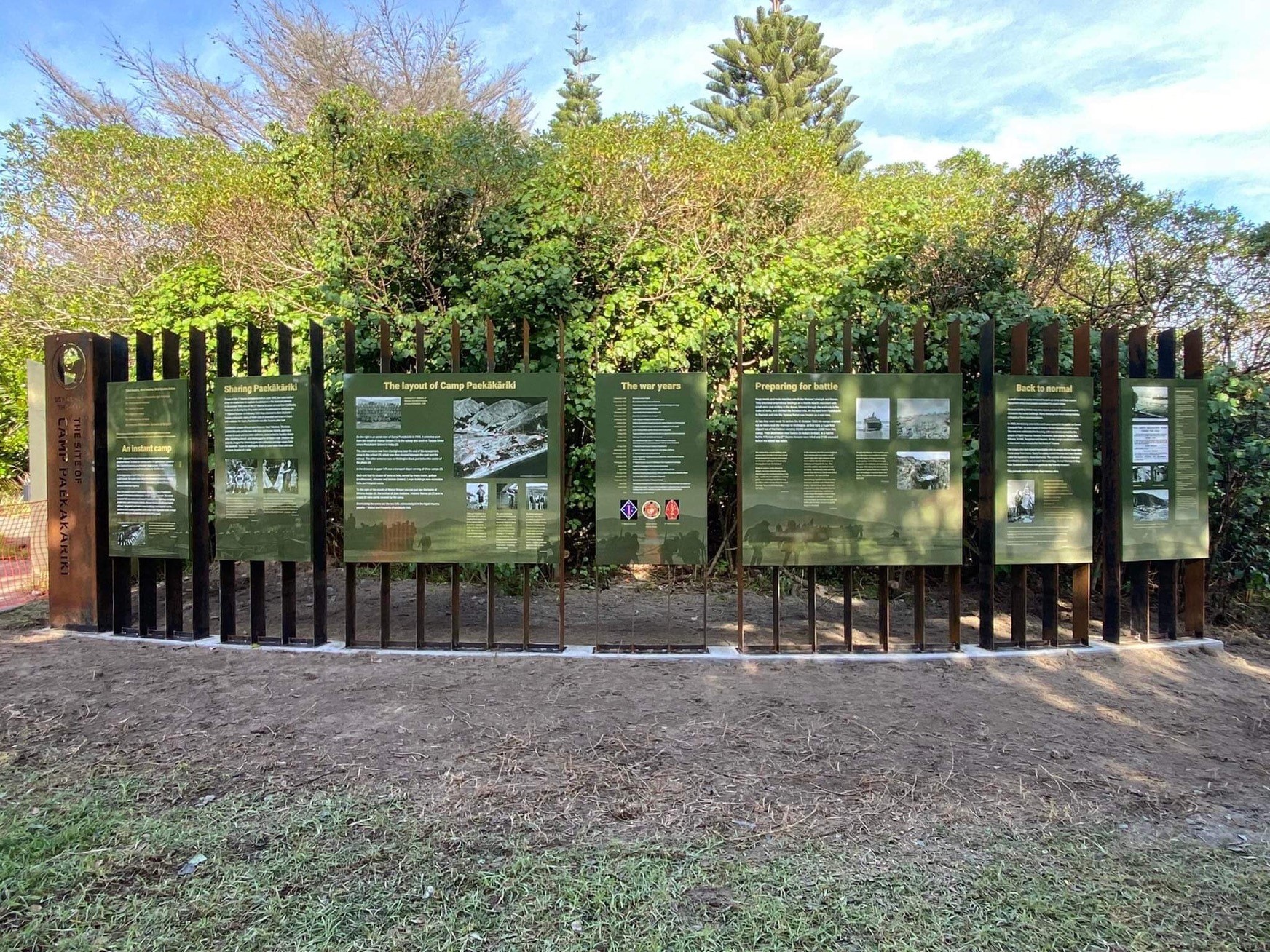 The WWII U.S. Marines Camp interpretation tells the story of the Marines based at the camp and local residents. We would like to acknowledge The Kapiti US Marines Trust for the work they have done bringing this project to life.

You can find this sign via the Wellington Road, Paekākāriki Entrance to Queen Elizabeth Park, near where Wainui Stream crosses Queen Elizabeth Road. Find the location on Google Maps.

Grab your sneakers, bike or horse - there are tracks here for everyone! Jump on the tram for a ride to the beach or go bird spotting in the wetlands. Find out about the US Marines who trained here in WWII.

Queen Elizabeth Park is the last area of natural dunes on Kāpiti’s coastline.

There are three main entrances and each offers a slightly different experience of the park.

The main entrance is near the Ramaroa Centre and the Tramway Museum. Along the road are walking, cycling and horse riding tracks, the WWII US Marines display, restored wetlands and the kahikatea forest remnant. The road continues to Whareroa Beach, surrounding dunes and picnic areas.

This entrance near the Paekākāriki Holiday Park gives access to picnic areas, the surf lifesaving club and safe swimming.

Access to walking and cycling tracks including the Te Ara o Whareroa trail, dune systems, and the Kāpiti Pony Club.

Travel by train or bus