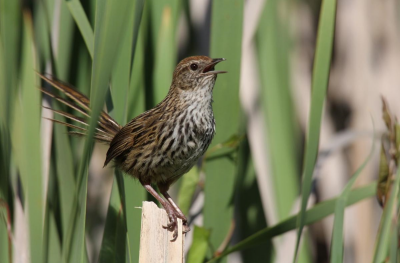 Pest control is working its magic in our region with Fernbirds "singing away" in the Pauatahanui Wildlife Reserve.

Following the release of a number of the at-risk and declining birds by Forest and Bird in 2017, Greater Wellington Regional Council installed a large number of traps in surrounding areas as part of a predator program to protect the Porirua Harbour.

Greater Wellington pest animal biosecurity officer Darren Lees was delighted to see this species while he was out birding last week.

"I spotted three Fernbirds in one morning while walking through the reserve, and I did not see any bands on them which is a great sign the population is growing.

"I recorded the birds which were on either side of the track in the smaller reserve on the Northern side of Greys road. In my recording you can hear the birds clearly singing away," Darren says.

According to Greater Wellington scientists, the birds previously flourished but became rare due to the draining of around 90 per cent of the country's wetlands.

The survival of these birds provides a potential indicator for wetland health because the Fernbird only survive in high quality, ecologically diverse habitats with rich food supplies.

Darren spoke to a Forest and Bird volunteer who was checking his trap line on the day and mentioned that the number of stoats they have trapped in the reserve has decreased.

"I believe this is due to the trapping our team does outside the reserve which slows down the rate of invasion into the area.

"As a keen birder I think it is quite cool that I get the opportunity to see and hear birds that in a small way, our team help to protect," Darren says.

People interested in helping keep birds safe can join a Predator Free group in their area, and either join the fight to keep special places for native animals clear of predators, or trap pests at their homes.