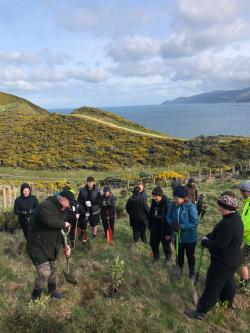 June Te Raumange Jackson, known to many as "Aunty June", passed away on July 26 and was remembered at a planting day on Sunday at East Harbour Regional Park's Parangarahu Lakes.

About 40 people turned out on Sunday including members of Rōpū Tiaki, a committee for co-management for the lakes formed by representatives of Greater Wellington and Taranaki Whānui.

Megan Somerville of Rōpū Tiaki says the day was particularly special because it offered a chance to pay homage to June who has been heavily involved in the planting, as well as placing Rāhui each year to protect the area's nationally vulnerable tuturiwhatu (banded dotterels).

"This is the fifth year the planting has been done by this committee. Aunty June was part of the original negotiations around the wetlands - she was a matriarch, she did the hard yards and she really knew the area.

"She and her son Peter have been involved with the lakes and placing Rāhui every year - even before the committee was formed. This year we dedicated the plot we planted to Aunty June."

Greater Wellington Eastern Parks Principal Ranger Jimmy Young says the day was a great success with about 400 native trees planted, including Manuka, mahoe and hebe, which were supplied by MIROs Gracefield nursery.

"The tuturiwhatu have come back to nest in the area earlier than usual, so we also did a rāhui on the day to help protect their nesting area," Jimmy explains.

"This is usually done later in the season so it was great having more people involved in this ceremony. We are also hoping to have an event to remove the rāhui which will give people the chance to get back out there and do releasing (weeding) of the plants too."

Greater Wellington Parks Portfolio Leader Prue Lamason thanks the volunteers for "the work they do and the difference they make."

"It's also fantastic to see families and people of all ages come together for this event," she says.

The dedicated group of planters ended the day with some shared kai before heading off on different walks throughout the park.