Locals meet "fish beneath their feet" at Matariki celebration

Locals meet "fish beneath their feet" at Matariki celebration 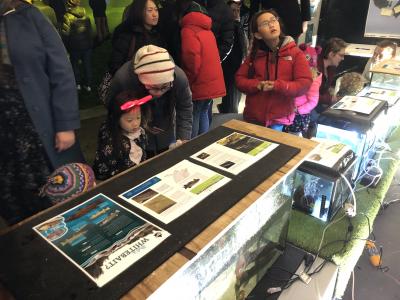 Wellingtonians enjoyed Matariki celebrations on the Waterfront while also getting to know the friends beneath their feet.

Wellington's Waterfront was swimming with people from across the region on Friday who came out to celebrate Matariki, the Maori New Year.

At the event titled Ahi Kā organised by Wellington City Council, environmental scientists from Greater Wellington Regional Council introduced locals to some "freshwater friends" that move through the streams beneath our feet.

"The fish we had on display included four out of five species of whitebait including a 30 centimetre giant kākopu, as well as some redfin bullies and giant bullies. People were amazed that adult whitebait actually grew that large," Shyam says.

He says many people do not know that beneath their feet runs a maze of piped streams that our migratory native fish need to swim up to reach the above-ground sections, sometimes several kilometres away in the city hills.

"For us it's all about getting people to change their behaviour. When people wash their cars on the concrete or their paint brushes near stormwater drains the contaminants from these ends up in the streams where these beautiful fish live," Shyam says.

Kara Puketapu-Dentice, co-chair of Whaitua te Whanganui a Tara, says Mataraki offers a perfect opportunity "to have a snapshot view into our city streams and to show that they still have a lot of life in them".

"However this is not the case for all our streams. Some are in a poor shape and many of our residents within the city have little, if any, connection with them," Kara says.

Greater Wellington chair Chris Laidlaw says, "The health of native fish species has always been a vital indicator for Māori of the health of the local environment as a whole.

"It's a principle that's been built into all our natural resource planning," Cr Laidlaw says.

The harbour was lit up at the City Council's event which gave attendees the chance to experience Maori performances, storytelling, kai and incredible fire displays on the harbour.