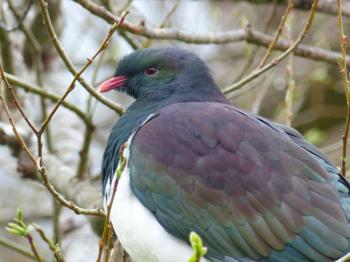 Greater Wellington Regional Council have monitored kererū numbers in Kaitoke Regional Park for the past 16 years, and this year's results are in.

This kereru monitoring is separate from the Great Kererū Count which is a nationwide citizen science project run by Urban Wildlife Trust & Kererū Discovery.

"Our analyses show that during the mast years (heavy fruiting years in the old-growth forests) kererū numbers fall.

"We are in a significant mast year this year which means there is plenty of food in the forest and therefore less incentive for birds to come down to the park to feed on the budding willows," Faline says.

The monitoring of kererū was delayed this year due to the fact none had shown up in the park by the end of August which is when the counts usually begin.

"This year I did the monitoring for five days from September 24 to 28. The willows had started budding so if the birds were going to show up at all this was the time."

Faline says Kereru usually visit the Kaitoke Regional Park campground in spring to find additional food before returning to the forest to breed.

"We monitor the birds by following the same transect around the park each year to keep our data consistent.

"We don't think the low turnout this year is something to be concerned about - the kererū are most likely feeding on native fruit trees in the forest which is actually a good thing," Faline says.