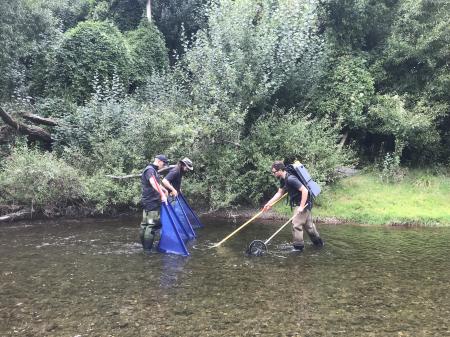 (From left) Evan Harrison, Alton and Bryn Hickson-Rowden carrying on his back an electric fishing machine.

Greater Wellington Regional Council takes a look at the health of our region's rivers and streams.

Freshwater specialists have been working to establish how healthy the Wellington Region's rivers and streams are by monitoring fish and invertebrate communities, and assessing the quality of river habitats.

"Fish are key parts of the river and stream ecosystems. The fish, invertebrates, and plants living in our waterways are "biological indicators" which means if they are healthy, the stream is healthy."

Over the last three summers, the team surveyed 48 sites, many of which were sites on rivers and streams where there was limited existing information on river health.

Ashley and the team used a sampling design which randomly selected sites on waterways across the region to the monitoring network fairly represented different stream and river types in the region.

"We used electric fishing as well as netting and trapping to collect the fish. Once they were caught we put them into buckets, then measured and monitored them before returning them safely to the water," Ashley says.

Because many of the monitored sites were on private land, the team needed to seek permission from various landowners.

"The majority of people we approached about monitoring on their land were really helpful and happy to have us. We were then able to give the landowners information they never had before about what was living in their streams.

"This could guide decision making around planting for stream shade and bank stability in order to protect some really cool, endangered native fish."

Greater Wellington Environment Committee chair Sue Kedgley says "It's critical we monitor the health of our rivers and waterways to see if they are improving or deteriorating in quality".

(From left) Evan Harrison, Alton and Bryn Hickson-Rowden carrying on his back an electric fishing machine.
alarm Updated April 28, 2022 at 9:27 AM