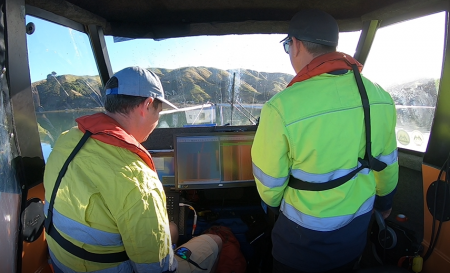 A recent survey of Te Awarua-o-Porirua Harbour shows sedimentation rates have more than doubled in the last five years, undermining animal and plant habitats and the healthy functioning of this estuary.

Co-ordinated by Greater Wellington Regional Council and co-funded by Porirua City Council, this bathymetric survey is the third in a long-term study of sediment deposition and erosion in the harbour.

Commenting on the results, Greater Wellington Marine and Freshwater Team Leader Dr Megan Oliver says sediment is accumulating in the deep basins of the harbour, making them increasingly muddy and unsuitable habitat for a range of species.

"This is a bigger issue in the Pauatahanui arm and is driven by factors such as urban development, motorway construction, forestry harvest, run-off from rural pasture and erosion of stream banks.

"We are losing the remaining seagrass meadows, important as habitat for fish and invertebrates, and in turn, the rich biodiversity our estuaries are so highly valued for."

She says the surveys are vital to our understanding of how sediment moves throughout the harbour.

"Upcoming monitoring will include habitat mapping of the harbour to measure changes in area of seagrass, saltmarsh, mud and sand," she says.

The Te Awarua-o-Porirua Whaitua Committee and Ngāti Toa have identified sediment as one of the big ticket items from the Greater Wellington whaitua process, Environmental Policy Manager Matt Hickman explains.

"Its Implementation Programme has set objectives of less than two millimetres per year and less than 1 millimetre per year for the Pauatahanui and Onepoto arms, which will be introduced into the regional plan next year."

"The message from our partners and community is clear - they want less sediment in the harbour. There are some big opportunities in the whaitua to demonstrate innovation with well-designed large urban development and the activities that happen on our own regional parks."

Regional Councillor and Whaitua Committee member Barbara Donaldson says residents have known from their own observations over a number of years that the harbour is silting up.

"This is particularly evident in the Pauatahanui Inlet which is frequently brown with sediment.

"This survey confirms that the rate of sedimentation is increasing at an unsustainable rate and we must change the way we manage and develop land to prevent further damage," Cr Donaldson says.