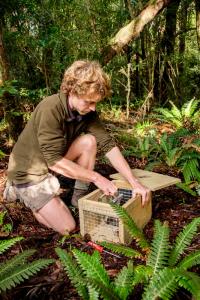 Greater Wellington Regional Council is gearing up to combat a significant mast year to control the number of predators posing a threat to our native wildlife.

A mast event is when trees produce extremely heavy flowering and fruiting which serves as food for pests, causing a boom in rat and stoat numbers.

Wainuiomata Mainland Island, which provides core breeding habitat for a large range of native forest bird species, including at-risk species, could be significantly affected by the mast.

Greater Wellington Biodiversity Officer Kim Broad says of all the pest animals in the area, rats pose the greatest threat.

When the fruit has gone, the plague of rats and stoats will turn to our native birds, lizards and insects.

This is likely to happen as birds are nesting, making both chicks and adults very vulnerable to predation.

Greater Wellington selected a number of Key Native Ecosystem (KNE) sites in the region to protect as of January this year there are 56 sites in the KNE programme.

In these top priority areas we work to protect native plants and animals and restore the natural function of the native ecology by controlling pest animals and ecological weeds, Kim says.

The Wainuiomata/Orongorongo KNE site stretches across 7364 hectares and is clad almost entirely with virgin native forest which has a diverse mix of beech, podocarp and broadleaf forests.

The site contains one of the largest areas of unlogged lowland podocarp forest in the lower North Island and is home to a number of threatened and uncommon bird, lizard, fish and plant species.

Within the mainland island which makes up 1200 hectares of the KNE site, predatory and browsing pest animals (possums, rats, stoats, weasels, feral cats, goats, deer and pigs) are kept to low levels using a network of traps and bait stations, as well as hunting, Kim explains.

He says significant increases in native birds have been achieved, with recorded increases in the numbers of rifleman, tomtit, whitehead, kereru and tui.

The improvement in the riflemen population allowed the translocation of 59 of these birds to Zealandia Ecosanctuary recently.

The Wainuiomata/Orongorongo Water Collection Area is responsible for around a fifth of our regions water. The mature native forest and low pest numbers are important factors in supplying quality drinking water to the region, Kim explains.

Kim says the area has experienced spikes in rat numbers resulting from masts in the mainland island in the past but numbers were back under control.

Monitoring showed that most birds took a hit after the last mast [in 2016], but most have bounced back to some degree with the help of added pest control efforts.

This years mast is likely to hit the Wainuiomata mainland island particularly bad though as both beech and podocarp forests are masting at the same time.

There are currently about 155 predator traps, 520 possum traps and 1275 bait stations in the mainland island which, when all is going well, get checked and re-baited on a regular 10 weekly cycle.

We will be combatting the expected boom in rat numbers by undertaking additional pest control in the mainland island and its surrounding areas this winter.