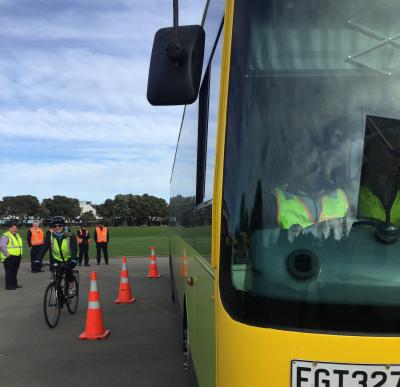 Greater Wellington Regional Councils Travel Choice team recently joined NZBus to run a Wellington workshop where cyclists and bus drivers switched seats to feel what it is like to ride in each other's shoes.

Driver trainer Nigel Hefford, who was a competitive cyclist for many years, said this type of workshop was hugely beneficial for both drivers and cyclists.

"I learnt how to ride a bicycle in 1964 and started competitive road cycling in 1969. I was also a track cyclist in the early 1970s when the velodrome in Wellington first opened."

Nigel has continued to ride a bike for transport ever since and knows what it is like to be passed on the road by big vehicles.

"I have been passed by heavy vehicles that have cut so close that they touched my handlebars."

Greater Wellington Travel Choice Coordinator Amelia Wilkins says the workshop was a big learning curve for both the drivers and the volunteer cyclists who attended.

"Bus drivers had the chance to experience what it's like cycling next to large vehicles, while the regular bike riders saw first-hand why they should never undertake a bus. The left-hand side is almost a complete blind-spot for the driver.

Pedal Ready instructors ran a cycle skills session as part of the workshop to ensure drivers felt safe and confident on their bikes.

Greater Wellington Sustainable Transport Committee Chair Barbara Donaldson says this kind of workshop is invaluable to both cyclists and drivers.

"We want to encourage more people out of cars and onto both public transport as well as sustainable modes of transport so it is important that everyone feels safe and confident on our roads."

Pedal Ready runs free monthly Cycling in the City sessions for those who would like to build confidence when cycling on the road. Visit pedalready.org.nz for more information.