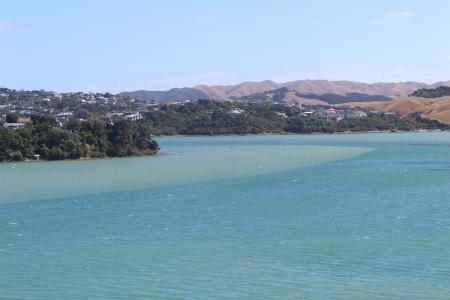 Positive steps towards a programme for cleaning up Porirua's waterways and harbour have been taken with the presentation, to Greater Wellington Regional Council, of Te Awarua-o-Porirua Whaitua Implementation Programme (WIP).

The WIP details the work needed to improve the quality of water in the waterways of Te Awarua-o-Porirua catchment and Porirua Harbour.

It was created following four years of study and public engagement by Te Awarua-o-Porirua Whaitua Committee and should be read alongside a separate statement from Ngāti Toa Rangatira for the Whaitua.

Both are cornerstone documents in Greater Wellingtons vision of improving the quality of water throughout the waterways and catchment area of the Porirua region, which runs from Churton Park in the south and Pukerua Bay in the north.

The WIP makes 75 regulatory and non-regulatory recommendations on improving the wellbeing of Te Awarua-o-Porirua, focussing on the issue of reducing pressure on the whaitua's waterbodies.

These include better riparian protection, improved stormwater and wastewater infrastructure, management of the impact of urban development, silt and sediment control, excluding stock from waterways and revisiting the process of water takes.

"This is a significant milestone for the project and for the Porirua community. There is a real keenness and desire among our community to clean up the harbour and restore the natural environment of Porirua's waterways," says Whaitua Committee member and Greater Wellington councillor Barbara Donaldson.

"It represents the merging of the values and interests of the Porirua community, and Greater Wellington is committed to progressing this vital programme of work into policies and work plans for the wellbeing of the Porirua catchment.

"The WIP also demonstrates our strong partnership with local Iwi Ngāti Toa. Although towards the end they chose to step back to produce their own standalone report, our ultimate goals are the same. We will continue our dialogue with Ngāti Toa with a view to meeting some of their more challenging timelines for change. But the fact remains that we are travelling in the same direction.

The Whaitua Committee was established in 2014 by Greater Wellington in response to the National Policy Statement for Freshwater Management to provide advice and direction on how to manage land and water within Wellington's northern catchments.

The regulatory recommendations in the WIP and the Ngāti Toa Rangatira Statement will be referred to Te Upoko Taiao, Greater Wellington's Natural Resources Plan Committee, for incorporation into the Proposed Natural Resources Plan through a plan change/variation process. The non-regulatory recommendations will be further developed by Greater Wellington in conjunction with external organisations.

Many of the recommendations will need to be included within the district plans of Wellington City Council and Porirua City Council to give effect to the National Policy Statement for Freshwater.

"I would like to thank the Porirua and surrounding communities for all their hard work in identifying their values in relation to fresh water and setting forward their priorities for cleaning up and improving Porirua Harbour and the other waterways and wetlands around the Porirua region," says Cr Donaldson.

Progress on the implementation of the programme will be made through reports to Greater Wellington's Environment Committee.