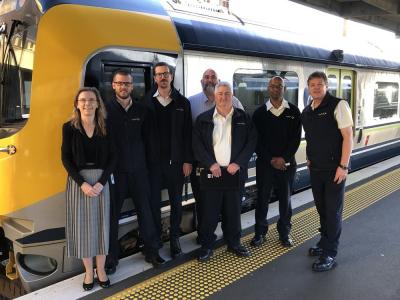 A childhood dream has come true for one Wellingtonian who was officially signed off as Transdev's newest train driver last week.

Justin Prout's love of trains extends right back to his childhood when he was Thomas the Tank Engine's number one fan.

'I always had an interest in trains ever since I was a child, and I imagined myself becoming a train driver one day but I didn't think it would happen so soon, Justin says.

Justin started off his working life off has a hair dresser before becoming a barista at New World in the Wellington train station.

"I was making a coffee for an operations manager at Transdev (which delivers services on behalf of Metlink) and we started talking about my interest in trains. She said there were passenger operator jobs available and that I should apply - and that's where it all began."

Justin then progressed to the role of train manager before applying for a job as a Locomotive Engineer (train driver) after passing psychometric and psychomotor testing. Once Justin was accepted to the programme, he began his training in July last year.

The train enthusiast completed the programme along with three other trainees which he says provided a fantastic support system.

Justin's training was slightly delayed due to the fact he had only experienced driving trains in good weather. "I had to wait a bit to be signed off so I could experience driving in bad weather conditions. Then we had a period of really bad weather and I realised how crucial that part of the training is."

Justin says one of the best parts of the job is the team he gets to work with.

"It's like a big family here, everyone is so helpful and supportive. The whole experience has been awesome from start to finish. That includes all my tutors, trainers and managers, now I'm just going to give it my all and do the best job I can."

Transdev is now recruiting for their 2020 train schools, if you are keen to apply simply visit www.TransdevWellington.co.nz/careers to start your journey as a Train Driver.