There is a toxic algal bloom in the lower Waipoua River, and Greater Wellington Regional Council is advising caution when swimming or dog walking along the riverbank. 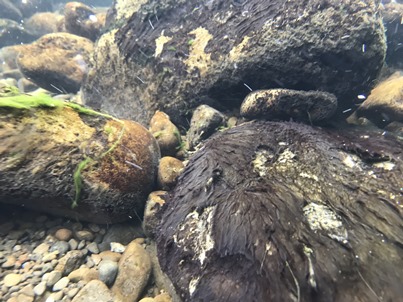 The bloom was discovered at a monitoring site at the Colombo Road bridge on Wednesday 10 October.

"The bloom is at fifteen to twenty percent coverage of the riverbed which is approaching our guideline alert levels", said Senior Environmental Scientist Mark Heath.

"Small mats of it are lifting and floating along the bank. These mats are a concern because toxic algae can be deadly if swallowed. Dogs love the smell of them and will eat them if they get the chance. They need to be kept on a leash if you're down by the river."

Toxic algae is potentially deadly to humans although there has never been a recorded case in New Zealand. But as toxic algal blooms have increased in frequency and size in recent years, Mark Heath is concerned that babies and toddlers could be at risk if levels rise.

"When a river reaches red alert level, there's a lot of toxic algae washing up and we're starting to worry about small children picking it up and eating or mouthing it. It's very dangerous. There's also potential for kids horsing around in the river to accidentally swallow it."

Above Masterton the Waipoua River runs through rural private land where Greater Wellington does not have monitoring sites. While the upper Waipoua is not as prone to toxic algal blooms as the urban stretch, people using the river there are advised to check the river and banks before swimming or dog walking, and avoid contact with the algae.

Toxic algal blooms are caused by a combination of warm weather, high nitrogen concentrations and persistent low water flows. They are usually cleared (or "flushed") by a period of high rainfall.

Greater Wellington will be monitoring all the region's rivers throughout the summer. Toxic algae warning signs will be placed at river entrances and there will be an awareness campaign helping people to identify it. If or when rivers reach red alert levels, Greater Wellington will inform the public through social and traditional media.

If a person swallows even a small amount of toxic algae (coin sized) this is a medical emergency - call an ambulance or go straight to hospital. If you have health issues after contact with toxic algae (e.g. skin contact) ring your doctor or Healthline 0800 611 116.

What is toxic algae?

Algae are a group of ancient creatures which grow underwater (they are neither plant, animal or fungi). Many algae are not toxic, but one of the types which grow in our rivers is - Phormidium. It forms a green/brown slime or leathery growth on submerged riverstones. When the water grows warm in summer, it lifts, detaches, floats to the surface and washes up in mats (or "rafts") at the river's edge.

How dangerous is toxic algae?

Toxic algae can be very dangerous to people and animals: it can be quickly fatal if swallowed even in small amounts (coin sized) - dogs have been known to die within half an hour.

Who is at risk?

Babies and toddlers are at most risk from toxic algae due to their habit of putting things in their mouths and their small size. They should be very carefully supervised if you are at the river during a bloom.

Dogs are at severe risk as they like the smell which toxic algae gives off as it dries. They will eat it if they can and must be kept away from the river's edge during a bloom.

What are the symptoms of toxic algal poisoning for people?

Skin contact with algal mats can result in irritation of the skin, eyes, nose and mouth. If swallowed toxic algae can cause vomiting, diarrhoea, abdominal pain, cramps, nausea and even death. These symptoms develop soon after contact with toxic algae, and if swallowed it should be treated as a medical emergency.

What are the symptoms of toxic algal poisoning for dogs?

High nitrogen concentrations are caused by run off from rural land and contaminated groundwater (caused by leaky sewage pipes and fertiliser runoff from gardens, golf courses and parks).

Shallow gravel-bottomed rivers are easily warmed by stones absorbing the sunshine, and are most susceptible to blooms.

How long does a bloom last?

An algal bloom will last until either the weather turns cold (making it harder for the algae to convert nitrogen into food) or a few days of heavy rain washes it away - this is called a "flushing event".

What happens when the algae reaches the sea - is it still poisonous?

No - algae is quickly dispersed and deactivated by salt water. Even during severe algal blooms the sea is safe to swim in, and you can safely walk your dog on the beach.

Toxic algal blooms flourish and persist when water flows are low. Low flows occur naturally when there is little rain, but they are exacerbated by high water take for human use.

Can we do anything to reduce the likelihood and severity of toxic algal blooms?

We can lower the amount of nitrogen in waterways by excluding livestock, using less fertiliser (urban and rural), fixing sewage leaks and ensuring septic tanks are well maintained.

Water conservation to enable higher flows could also help - rural, industrial and domestic users can all play their part.

Is Greater Wellington doing anything to reduce toxic algal blooms?

There is no quick or obvious solution to the growing number and volume of toxic algal blooms, but improving water quality and quantity is most likely to mitigate them.

Greater Wellington is beginning a consultation process with water users which will result in new freshwater standards. You can be part of the consultation  join here. The standards will be in place by 2025.