5000 new trees thanks to Spade Aid

5000 new trees thanks to Spade Aid 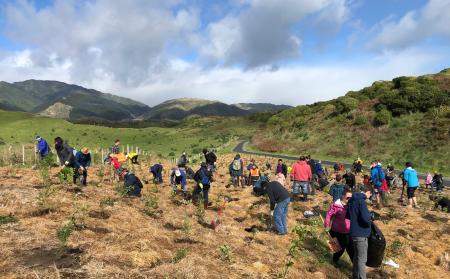 Hundreds of planters of all ages flooded into Queen Elizabeth Park on Sunday, putting 5000 trees in the ground for this years Spade Aid event.

Greater Wellington Regional Council hosted the event which was the biggest planting day in our regional parks this year.

Greater Wellington Parks Manager Amanda Cox says it was a superb day with the plants going in the ground in just over two hours beside Te Ara o Whareroa just south of Whareroa Road.

"We had real camaraderie on the day & a lovely atmosphere, with everyone enjoying the opportunity to connect and contribute to the park, in both sunshine and rain."

The plants came from Porirua City Council nursery as small seedlings which were then grown on to a plant-able size by volunteers at the Queen Elizabeth Park nursery.

The 5000 trees were made up of coastal and pioneer species which can withstand the windy and salty coastal conditions and cope with exposure, not requiring shelter or shade of other plants.

"There were also two rare species of plants in the mix. In a few years this part of Queen Elizabeth Park will be transformed as our coastal forest zone grows," Amanda says.

Planters were committed to the job, sticking it out through the pouring rain before the sun returned for the second half of the event. After the planting attendees gathered under a gazebo for some well-earned sausages and hot drinks.

"Thanks so much to everyone who contributed, not only to a wonderful day of planting but to all those who grow the plants in the nurseries.

"Also a big thank you to those who spent an intense day with our staff laying the plants out in readiness for Spade Aid," Amanda says.