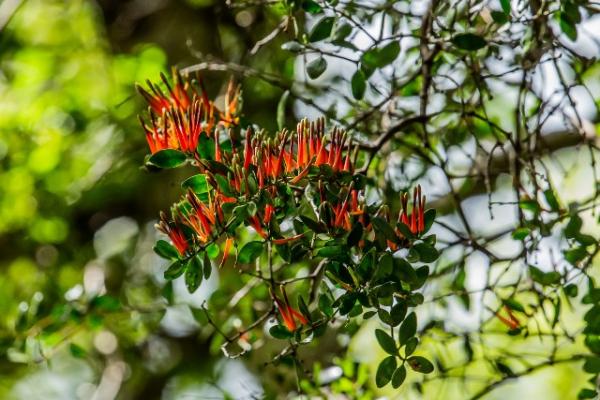 Rare native mistletoe (Peraxilla tetrapetala), known as beech mistletoe, has been spotted lately on a number of tracks in Kaitoke Regional Park and Pakuratahi Forest.

"We are seeing more and more beech mistletoe blooms each year, which we believe is largely due to our possum control work in the area," says Barrett Pistoll, Senior Monitoring Environmental Officer at Greater Wellington Regional Council. 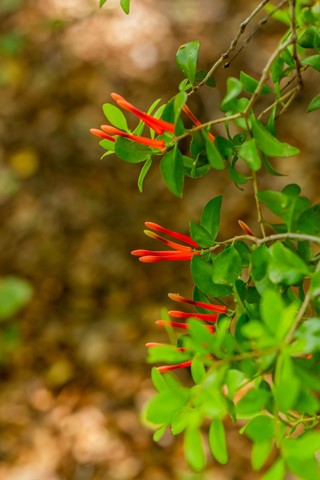 "The best way to spot them is to look for a carpet of red petals on the ground. If you do, be sure to look up  they often grow quite high up."

The Beech mistletoes are now becoming quite rare in New Zealand's forests, especially in the North Island. This is mainly due to forest clearance, invasive predators, and the decline in native bird species that act as pollinators and seed-dispersers.

"Possums love to browse the fleshy leaves of these species. The presence of mistletoes still in our regional parks is a testament to our ongoing pest control efforts and forest management practices."

Mistletoe is a famously romantic plant. According to Norse mythology, when the god Odin's son Baldur was prophesied to die, his mother Frigg, the goddess of love, went to all the animals and plants of the natural world and asked them to promise not to harm him. But Frigg neglected to consult with the unassuming mistletoe, so the god Loki made an arrow from the plant, which was used to kill Baldur. According to happier versions of the myth, the gods were able to resurrect Baldur from the dead. Frigg declared mistletoe a symbol of love and promised a kiss to all who passed beneath it.

"This is the perfect time of year for a romantic stroll in the bush," says Mr Pistoll. "We encourage people to visit the area and enjoy these rare and beautiful flowers."

Beech mistletoe has been monitored by members of Upper Hutt Forest and Bird for more than 10 years.

Some key facts about beech mistletoe: