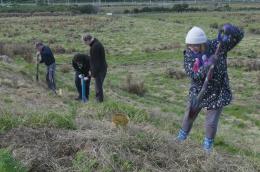 A long-held dream to return large parts of Queen Elizabeth Park to a forest of native plants and animals will be one step closer this week when a ground breaking new approach to planting starts.

"This is the beginning of a green transformation we've visualised for a long time and have been planning for many months. It includes a planting system we've successfully trialled to deliver better survival rates and value for our planting dollar," says Greater Wellington councillor and parks portfolio leader Prue Lamason.

Thanks to the generosity of a $300,000 donation from Kāpiti locals Chris and Sam Maclean through their Maclean Trust, a total of 25ha in the park's northeast has been retired from the farm licence area. These peatlands will be rehabilitated through the restoration programme. So far this has included the control of invasive weeds, particularly gorse, in preparation for planting.

"I am delighted that we are starting the restoration of the historic Mataihuka wetlands," says Chris Maclean. "Not only will it enhance the ecology of the park, it will also provide a vital community asset that will absorb the increasing stormwater climate change is likely to bring. The solution to future problems can often be found in the past, when the Mataihuka wetland was one of the region's largest."

The second stage of the programme, which starts today, involves a new method of native forest establishment designed by Greater Wellington partners Groundtruth. They manage the whole process from seed collection and recording through to managing trees until they are guaranteed to survive by themselves.

Groundtruth Managing Director Peter Handford says historically re-establishing native vegetation over large areas has been fraught with expense and poor plant survival. However the new integrated QPlant approach has been successfully trialled and promises flourishing native forest will be rapidly established over the next few years.

"Think of it as a native tree kindergarten. We don't just plant the trees and leave them to fend for themselves but manage them from seeds through to toddlers. Before we got to this stage we did extensive research into the unique properties of the park and its history, including its soils, vegetation, waterways and biodiversity."

Groundtruth also uses an online record system so funders and managers can track the health of the plantings.

It will begin with a four-hectare planting, rising to eight next year, and twelve in year three. Around fourteen pioneer species such as manuka and kanuka will go in first to provide shelter for species such as kahikatea, pukatea, kohekohe and titoki.

As well as habitat restoration the Maclean Trust's investment will also focus on improving recreational access to this part of the park. Once the planting is complete, a new track for cycling and walking will link the restoration area with the very popular Te Ara O Whareroa trail.

The highly visible site, which is part of the Whareroa Steam catchment, lies at the north-eastern boundary of the park with SH1 to its east and Poplar Avenue to its north.

The transformation of the area will take place over five years. It started with the development of a restoration plan which focuses on hydrology, soil profiling and species selection and has now moved on to the start of its planting stage. To ensure the planting area remains in optimal condition animal and weed control will be carried out for three years after planting.

There will also be a focus on managing water throughout the area. Specialist hydrology advice will be taken to manage the water that drains from SH1 into the park, ideally filtering it through native vegetation before it enters the park's streams. Clean water is vital to healthy environments.