The biggest threat to native wildlife in the Wellington Region is introduced predators such as rats, possums and stoats.

We face a choice; let predators reach out of control numbers, or manage them to protect our native species, primary production sector and social wellbeing.

The biodegradable pesticide sodium fluoroacetate (or 1080) is one of the many methods we use to manage the array of predators within the Wellington Region. 1080 has been proven over many years to reduce predator numbers safely, with no adverse impact on the environment or human health.

We use aerial 1080 for controlling predators in areas which are rugged and/or hard to reach, making them difficult to control through other forms of ground control.

The use of 1080 requires consent from the Medical Officer of Health (MOH). It also must comply with both the Hazardous Substances & New Organisms Act and the Resource Management Act.

First, non-toxic tan-coloured “pre-feed” cereal pellets are sown by helicopter. This gives possums a taste for cereal pellets, encouraging them to consume the 1080 pellets sown at a later date making the operation more effective.

About seven to ten days after the non-toxic pellets are sown, helicopters will sow cereal pellets containing the biodegradable pesticide sodium fluoroacetate (1080).

Rats will die when they consume possum baits, while stoats will be killed when they consume the carcasses of poisoned rats and possums.  A reduction in these introduced predators will further protect native plants and birds.

In June 2011, the Parliamentary Commissioner for the Environment strongly endorsed the continued use of 1080 in New Zealand.

1080 is an organic, water soluble and biodegradable substance that is readily broken down by bacteria and other micro-organisms in the environment. Local health authorities apply strict conditions to aerial operations so that drinking water supplies are not contaminated. Safety has been confirmed by tests on several thousand water samples taken after aerial 1080 operations over many years.

We propose to undertake an aerial possum control operation on Terawhiti Station and Kinnoull Station, using the biodegradable pesticide, sodium fluoroacetate (1080). This has been delayed and will occur during suitable weather conditions in 2023.

The proposed operational area shown on the map covers approximately 3,250 hectares of regenerating and plantation forest. The area is extremely difficult to access due to the nature of the terrain and density of habitat.

The properties involved are owned and managed locally and there is no public land involved within this operational area.

Why is this operation happening?

This work is being done as part of the Regional Possum Predator Control Programme (RPPCP), which is a Greater Wellington Regional Council pest management initiative that aims to control possums and other predators, which are a serious threat to our native biodiversity and economy.

Greater Wellington has implemented the RPPCP to preserve the work completed by OSPRI (TB free), by maintaining low possum populations in areas declared ‘Bovine TB free’. The RPPCP continues to expand within the Wellington Region, as new areas gain this status.

Possum control has the additional benefit of controlling rats and stoats. Rats will die when they consume possum baits, while stoats will be killed when they consume the carcasses of poisoned rats and possums. A reduction in numbers of these introduced predators will further protect native plants and birds.

We were unable to complete the operation in 2022 due to poor weather.  It will be our highest priority in 2023.

The operational area covers approximately 11,200 hectares, located in the southern foothills of the Tararua Ranges. We need to protect this area from possums to preserve its distinctive forest, which has been largely unchanged since Europeans arrived in New Zealand.

All land within the treatment area is managed by Greater Wellington, and has been set aside as a source of water for treatment and supply to the cities of Wellington, Porirua, Lower Hutt and Upper Hutt, or for recreation purposes. 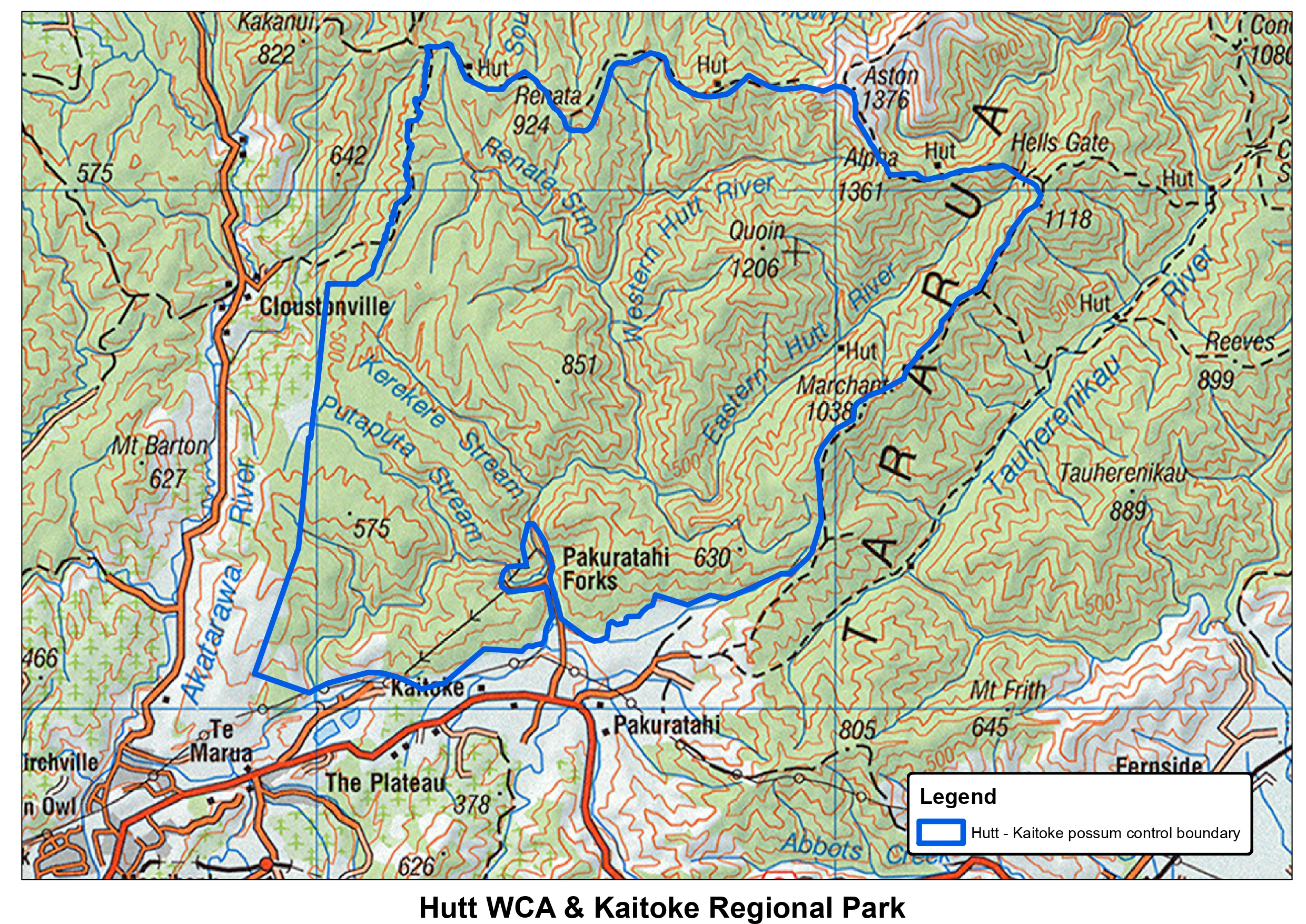 Why is it being done?

Our Key Native Ecosystem programme identifies and protects some of the most significant natural sites in the region, ensuring natural habitats are healthy and able to support our native plants and animals. The operational area is ecologically diverse with eight different forest types, four wetlands, numerous major and minor watercourses, and sub-alpine and alpine flora present.

One of the key management principles is to preserve raw water quality and minimise the extent of water treatment necessary.

Healthy aquatic and terrestrial ecosystems have a positive impact on water quality. This means that managing the key threats to our biodiversity also manages those associated with our water quality. Possums threaten both of these and need to be managed. If the health of the forest is allowed to degrade, it will eventually impact the catchment’s ability to provide healthy fresh water for our communities.

A reduction in these introduced predators will further protect native plants and birds, especially prior to spring bird fledging.

27 May: green coloured pellets containing the biodegradable pesticide, 1080 were applied to approximately 72% of the operational area.  The area still to treat is all within the Hutt WCA, and we are waiting for the weather to improve before we can complete it.

On 27 May, a small amount of 1080 bait was spilt onto the ground at the loading site in Kaitoke Regional Park during the routine refilling of one of the hopper buckets attached to the helicopter that is used for distributing the bait.

The error was spotted immediately and the small, affected area was searched for spilled pellets.

Additional security measures were also put in place immediately with the affected area fenced off and warning signs erected.

Warning signs have also been placed throughout the operational area boundary. There are no health risks to the public if the messages on the signs are followed.

1080 pellets are 20mm in diameter, coloured green and are cinnamon lured to make them unattractive to birds.

Each pellet contains 0.15% of 1080 and will be applied at a rate of 2kg per hectare. That’s less than one small box of laundry powder per rugby-field-sized area.

Who will be affected?

Hunters – hunting for deer, goats or pigs will not be permitted for four months following the 1080 application. Hunting permit holders will be provided updates when hunting can recommence.

People with dogs and commercial dog walkers – are advised that 1080 is deadly to dogs.  Dogs will not be permitted in Kaitoke Regional Park, and you should not bring dogs into the area until all baits have become non-toxic and possum carcasses have decomposed. Decomposition is climate dependent but expected to take four to five months following the 1080 application.

Walkers and trampers – access is permitted provided that precautions on the poison warning signs are followed.

Adjoining landowners and graziers – will be notified and we will need to ensure boundary stock fences are intact.

Information sheets and operational maps are provided to all known local interested parties, including:

We will put up warning signs and information boards before the operation starts. These will remain in place until poison residues are no longer present.

We will issue statements and updates to the media, including local newspapers.

We propose to control possums across the area to ensure that their numbers remain low for as long as possible. Currently, the best tool we have for this is aerially-sown 1080 (sodium fluoroacetate). This method has the additional benefit of controlling rats and stoats. Rats will die when they consume possum baits, while stoats will be killed when they consume the carcasses of poisoned rats and possums.

Dogs are extremely vulnerable to 1080 poisoning. For this reason we have put together some guidelines and resources you can use to keep your dog safe in our region’s parks and reserves.

As well as our operations, Department of Conservation and OSPRI are also involved in 1080 pest control. We strongly recommend all dog owners read this information on keeping their dogs safe during, and following, any 1080 operations in the Greater Wellington Region, not just those that we are leading.