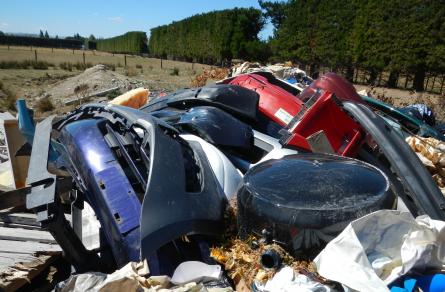 Greater Wellington is calling for a unified community effort to protect our Wairarapa rivers which are facing constant pollution, contamination and desecration from ongoing rubbish dumping.

In the last year, Greater Wellington conducted 12 site clean-ups to commercial and domestic waste dumped in Wairarapa rivers by thoughtless members of the community.

These clean-ups have included the removal of cars, household waste, concrete rubble and rotting animal carcasses.

Greater Wellington Wairarapa Committee Chair and councillor, Adrienne Staples says, "The mindless rubbish dumping we've seen take place, especially along Featherston rivers this summer, is a huge risk to water health, human health and the precious species that live in and around our rivers.

"Quite simply, this pollution kills wildlife and stops the community from connecting with our rivers - recreationally, through collecting mahinga kai or for general wellbeing.

"The damage to our rivers could be irreversible - they won't be the same for future generations if people continue to pollute," says Cr Staples.

Cr Staples reflects that rubbish dumping and damaging wildlife is not the type of behaviour most people in the Wairarapa tolerate, yet it's still happening, and unfortunately the acts of a few are costing the whole community.

The rubbish dumped in rivers is not ring fenced, as pollution makes its way down stream and impacts other parts of the Wairarapa - leaving a wake of destruction.

"Rubbish flows downstream and collects in and around the moana, threatening the unique and endangered species that call this place home."

And it's not only the environment that pays the price from the careless acts of a few. The dumping of rubbish comes at around $500 per site clean-up as a minimum, depending on what has been dumped, and this cost is carried by ratepayers.

"We need the community to take collective responsibility for rubbish dumping by keeping their friends, family and neighbours in check," says Cr Staples.

"Rubbish dumpers need to think about the harm they are causing - not only to the environment, but also to our community - we all want to be able to enjoy our rivers safely."

Ongoing rubbish dumping creates a 'no-win' situation for the community, as it will eventually lead to preventative measures to stop the pollution, such as the installation of gate locks to prevent vehicles driving onto the area and dumping.

The community must use official rubbish disposable options that reduce environmental impact, unnecessary costs and protect the community from hazards and risk.

"Collectively we can make a difference to protect our precious rivers, but it will really take a unified effort so we can put an end to rubbish dumping," adds Cr Staples