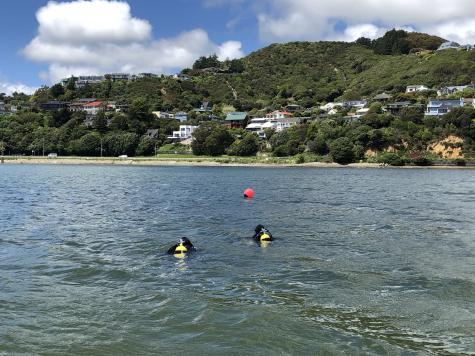 Last month Greater Wellington conducted the sixth underwater survey in Te Awarua-o-Porirua Harbour as a part of a programme to assess the environmental health of the highly valued Onepoto and P?uatahanui estuaries.

The survey, carried out by NIWA divers, involved monitoring the diversity of animals in sediments, the quality of that sediment, and the amount of storm water contaminants and mud.

Results to date indicate that the harbour is not in good health.

Greater Wellington senior coastal scientist, Dr Megan Melidonis, says, The key issues facing this environment are sedimentation, pollution, and ecological degradation. The number and type of species living in the sediment is changing as more mud is settling on the harbour floor.

This reduces the ability of the estuaries to support food gathering and recreation, or to protect us from storm surges and flooding. Estuaries are important for storing carbon, they act as kidneys for our environment by filtering freshwater before it enters the open coast.

Te Awarua-o-Porirua Harbour is a special area that needs our protection, its of great cultural importance to Ng?ti Toa Rang?tira who have kaitiakitanga (guardianship) over the area and historically used the estuary for mahinga kai, says Dr Melidonis.

This area is also of significant economic and ecological value, with the wider catchment extending across 18,470 hectares of rural farmland, lifestyle blocks, urban settlement, parkland, rail and road corridors. These activities in themselves present ongoing pressures on the estuarine ecosystem.

Since the programme was launched in 2004, significant milestones have been met.

Turbidity sensors, which measure water murkiness, have been installed in the streams of the three largest catchments and sedimentation plates have been buried throughout the estuary. In addition, there have been two surveys of the harbour floor to measure the depth.

These tools assist with mapping habitats, monitoring sediment quality, marine invertebrate health and the amount of sediment entering the harbour.

With an average 1.2 mm of sediment being deposited into the P?uatahanui arm per year and 3.2 mm in Onepoto arm, the harbour continues to face environmental stress largely from land disturbance.  This contributes excess sediment through more than 275 km of streams and rivers that enter the harbour, adds Dr Melidonis.

The data generated by monitoring is put to a number of positive uses including guiding management and policy actions, and supporting efforts to restore the catchments and streams that flow into the harbour.

Monitoring also underpins the recommendations in the Te-Awarua-o-Porirua Whaitua Implementation Programme (WIP), along with the Ng?ti Toa Statement, which outline the harbours freshwater and coastal water objectives.

In addition, Greater Wellingtons Mahi Waiora programme, which translates as the wellbeing of water, is designed to improve water quality and biodiversity in a systemised way. This programme works with communities in the north-eastern stream catchments of the P?uatahanui arm to reduce sediment and improve the health of the harbour.

Greater Wellington Regional councillor for Porirua and Tawa, Jenny Brash says, These surveys show the vital importance of monitoring the condition of the harbour. Without the data we cannot make the strategic decisions on restoration implementation programmes which enable us to work together to restore the harbours health.

Survey results will be available next year. Results from earlier surveys are available on the Greater Wellington website.