What astonishing November weather. Rainfall records for the month throughout the region fell faster than the rain as the region's big dry really started to bite and summer made a grand entrance.

In most parts of the region you'd have to go back decades to match the low rainfall, and in parts of Otaki and Wainuiomata you'd need a time machine to match records set in 1890 and 1893. 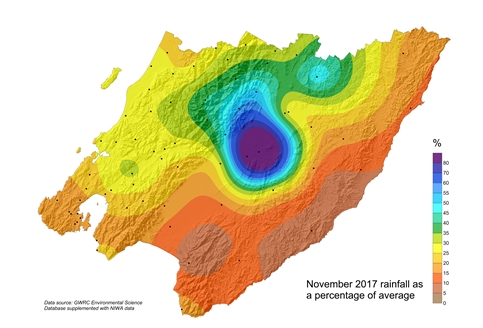 November rainfall as a percentage of average

Exceptionally dry in (most of) the Wairarapa

November rainfall across the Wairarapa was exceptionally low. Only 8mm of rain was recorded at Masterton (14% of average) making it the driest November since at least 1992. At the Tauherenikau Racecourse there was just 14mm which makes it the lowest November total since records began in 1963. Across most of the Wairarapa monthly rainfall was less than 25% of the November average.

Isolated thunderstorms over the last week brought some intense downpours to some areas. Rainfall at Carterton and Greytown had been looking very low with 7mm and 9mm recorded respectively until the 26th when Carterton received 74mm of rain in three days, which included a very intense downpour of 45mm that occurred over just two hours on the 29th. The monthly rainfall that had been heading towards 12% of average ended up being 140% of average.

Rainfall records have been plundered across Wellington, Hutt Valley and the Kapiti Coast with monthly averages barely reaching 25% of normal. The November rainfall total of 17.5mm recorded at Karori Reservoir (Zealandia) is the second lowest November total since records began in 1879. The only lower November total was 72 years ago in 1945. At Wainuiomata, the 27mm total is the lowest November rainfall since records started in 1890.

The headwaters of the Wainuiomata, Orongorongo and Hutt rivers are key water supply collection areas and have been hit hard by the dry conditions. Rainfall recorded during October and November shows that period to be the driest on record (since 1980) in the Orongorongo valley and the second driest at Kaitoke since 1951.

Otaki and Waikanae received November rainfall of 21mm and 26mm respectively - both 25% of normal. Rainfall has been measured within Otaki township 1893 and this is the lowest November total that has been recorded since then. Waikanae rainfall was the lowest for November since 1969.

Even the Tararua ranges were dry

River flows across the region have been very low during November with most monitored sites being around 20% to 40% of average. The Hutt River and tributaries saw only 25% of the normally expected November flow. Other monthly flow percentages include: Wainuiomata River (30%), Porirua Stream (40%), Waikanae and Otaki rivers (35%), Ruamahanga River (30%), Waiohine and Waingawa rivers (30%), Pahaoa River (20%).

The very lowest flow measured in the Hutt River towards the end of the month was quite significant, with a frequency of occurrence around 1 in 30-years (3%) during November. River flow will typically drop lower than this during summer but to see the river this low during November is rare. The Wainuiomata, Waiohine, Tauherenikau and Ruamahanga rivers also recorded very low flows falling to levels expected once in 20-years during November.

Along with stress on the public water supplies, low flow restrictions on irrigators may begin to bite earlier than normal if the dry conditions continue.

2017 has been a highly variable year for rainfall. Since rainfall records began in 1980 at Orongorongo range: April was the wettest; June the 2nd driest; July the 3rd wettest; August the 4th wettest; October the driest; and November the driest.

Highlights - a showcase of broken records