People in the Wellington region are being encouraged - through a new road safety campaign - to sharpen up their focus at intersections by keeping their Eyes On. 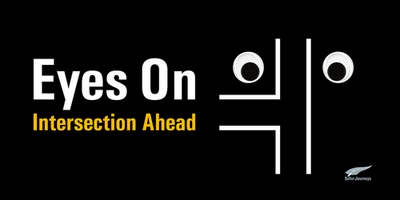 "Eyes on - it's a very basic message but one that, clearly, people need to be reminded of, particularly when approaching intersections on local roads.  Stay focussed, if you take your eyes off the road for even just a second, things can go terribly wrong."

This campaign encourages people to be more observant when approaching intersections - looking out carefully for other traffic and sticking to the road rules.

The eye-catching message is being displayed over the next few months on billboards, backs of buses and in newspapers around the Wellington region as well as on selected websites.