Predator Free Wellington (PFW)'s mahi in Miramar has seen the peninsula transformed into a safe haven for our native wildlife, with a steady resurgence of tui, kererū, kākā, kākāriki, geckos, and more unexpected visitors besides.

Local resident and Greater Wellington chair Daran Ponter, has been enjoying the dawn chorus on the peninsula which he says has hit a crescendo lately thanks to the eradication of pests such as rats, possums, stoats and weasels.

"I take daily walks on the peninsula, so PFW's mahi is really blindingly obvious to me. I'm now used to hearing tui sing and piwakawaka rustle underfoot," says Cr Ponter.

Cr Ponter recounts a recent walk that was unlike any other.

"There I was, having a stroll, whistling along with the birdsong, when all of a sudden I hear rustling in the nearby bush. Much bigger than any gecko or kākā I've ever heard. I catch a glimpse of feathers and think: Now that's a massive chicken.

"But then this giant two-legged, long-necked creature comes straight onto my path, looks me right in the eyes, and gives me a little wink before loping off," recalls a bewildered Cr Ponter.

Cr Ponter immediately dialed Greater Wellington's biodiversity team to alert them of what he saw.

Once I assured them that I was, in fact, dead sober apart from a few wines, they sent the PFW team down to investigate, adds Cr Ponter.

The team found evidence of fresh droppings that appeared to come from a large bird. DNA analysis of the samples confirmed Cr Ponter's suspicion: Moa are back on Miramar peninsula. This news comes following a similar report from Te Motu Kairangi-Miramar Ecological Restoration, which was unfortunately dismissed as an April Fools' joke.

But PFW's Project Director, James Willcocks, assures people that this solid evidence proves it's no joke. He's beyond excited about the prospect of moa returning to life on the peninsula, but how the flightless bird made it to Te Motu Kairangi isn't entirely clear.

"We're aware that Crown Research scientists had been working a few years ago on using recovered DNA from extinct animals and we can only assume they had some success," says James.

"Our priority now is to review and adapt our biosecurity plans. Fortunately with the recent Jobs for Nature funding received, we'll soon have an additional 13 Field Operators to help us, we'll be working around the clock to protect this taonga," says James.

James hastened to add that PFW's network is baited and set up to monitor rats and mustelids, and not designed to work on giant birds.

Not wanting to be just another councillor who cried moa, Cr Ponter is relieved that his sighting has been scientifically proven and thanks PFW for swooping in to take swift action.

"Even before this sighting, I think everyone in Wellington City recognised PFW's work is making a world of difference. Now, it seems that even extinct birds want to live here - and that's flocking incredible!"

Residents keen to bring moa back to their own neighbourhoods can get involved in the second phase of trapping, Island Bay to CBD, by signing up on PFWs website. 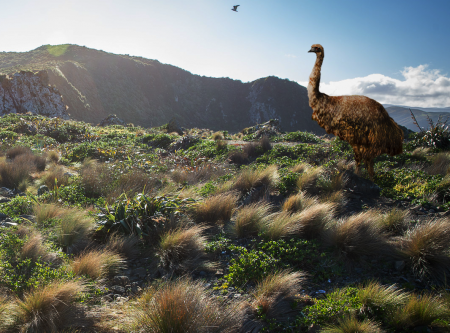