The first pair of two-car units from Wellingtons new batch of Matangi trains arrived by boat from Korea yesterday morning (Sunday 24 May).

The two-car units are the first of 35 pairs made by Hyundai that will arrive in stages by the middle of next year. 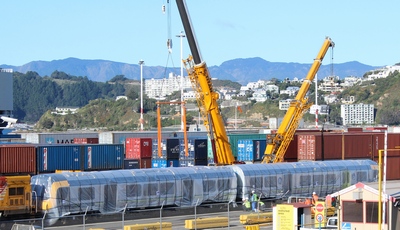 "This is the final step on the way to having the single, modern, electric train fleet the region's commuters deserve," she says. "And it can't come soon enough. If you stand on a platform today you can still hear a collective groan when the old units come into view instead of one of our new Matangi.

"It will be a good day for Wellington commuters when we've got the new fleet fully in place. From that day on every journey will be a smooth and comfortable one and I'm sure Wellingtonians will continue flocking to trains as a result."

The remaining Ganz Mavag units will be phased out as the new trains arrive and are commissioned.