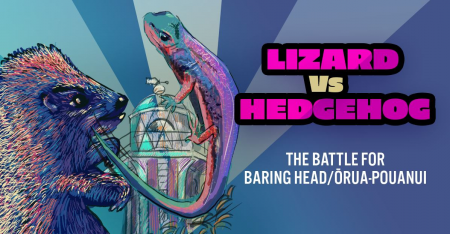 Lizard numbers are growing in Baring Head/О̄rua-pouanui, signaling the success of Greater Wellington's and Friends of Baring Head's (FOBH) efforts to protect one of our Key Native Ecosystems (KNE) by doubling down on hedgehog and other pest control.

At first glance, this rugged and iconic landscape is a tranquil setting - however to the conservationist's eye, Baring Head/О̄rua-pouanui is an area where predator and prey battle for survival.

Baring Head/О̄rua-pouanui is home to some of our region's most unique species and habitats, and falls under Greater Wellington's KNE programme that helps manage 57 sites covering 48,000 hectares in the region.

"The rising number of lizards can be attributed to the extensive restoration work and predator control operations led by FOBH, who've been a significant ally to our native taonga," says  Philippa Crisp.

"All our native species at Baring Head including shore birds like Banded Dotterels and invertebrates like the Katipo spider will see the benefits of this predator control, however the growing number of lizards is really encouraging and a great indication that the targeting of hedgehogs is proving successful already," says Rob Masters.

Tim Trengrove, FOBH's trapping coordinator and volunteer, who organises a team of volunteers to trap pests says there are many threats to native wildlife, but hedgehogs are a persistent threat at Baring Head/О̄rua-pouanui.

"Hedgehogs will eat pretty much anything including eggs, chicks and lizards. Hedgehogs are a massive threat to Banded Dotterels, especially during nesting season when they're most vulnerable," says Tim Trengrove.

For many of the people who help keep Baring Head/О̄rua-pouanui safe from predators so native species can prosper, pest control is a day and night commitment.

Darren Lees, Greater Wellington biosecurity officer by day and dedicated volunteer by night, says that the cover of darkness allows them to track nocturnal pests' movement more effectively to reduce their impact.

"While many native species are asleep and vulnerable, predators like hedgehogs prey on their eggs. We use thermal cameras to track where predators go at night so we can control them better.

"It's hard work but it's worth it so we can keep on catching hedgehogs faster than they can breed, giving native species like lizards a better chance for survival."

Northern Spotted skinks remain endangered, however a specific pest control programme helps Baring Head/О̄rua-pouanui to be one of the safest places for this species, outside of sanctuaries.

"It's been a real team effort and success to target hedgehogs and other pests, and see the rising numbers of lizard and other special native species.

"It's wonderful to see the tangible results of a flourishing ecosystem reflected in the data, thanks to all the hard mahi of our volunteers and Greater Wellington employees," adds Cr Lamason.

The battle for Baring Head/О̄rua-pouanui continues, with Greater Wellington and the Friends of Baring Head firmly supporting Team Lizard.

To join Team Lizard and help protect our native species, become a trapping volunteer by getting in touch with Jo.Greenman@gw.govt.nz