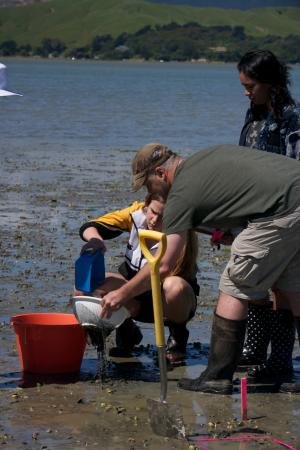 Pāuatahanui Inlet, north of Wellington, has recorded a 32 percent increase in its cockle population according to a three-yearly cockle count undertaken by the Guardians of Pāuatahanui Inlet with the help of Greater Wellington staff.

Known as the longest running citizen science project in New Zealand, the survey uses cockles as an 'indicator species' for harbour health, helping users understand how threats such as sedimentation can affect the ecology of the area.

Conducted over a four hours at low tide the survey relies on a community of around 100 volunteers who give up their time to dig, count and measure each cockle, meticulously recording their findings on sheets of paper.

The latest survey, undertaken late last year with results just published by NIWA, shows the cockle population at its highest level since 1976, with the average density of cockles over the intertidal survey area at 380 per square metre.

Greater Wellington senior biodiversity advisor Jo Fagan says the cockles, as an indicator species, can help us understand the overall health of the ecosystems they inhabit. As filter feeders, their survival and reproduction can be affected by sedimentation levels. By monitoring the health of cockles in the Pāuatahanui Inlet, we can estimate how other species may be faring in the same space.

Jo cautions that the improvements on the 2016 survey needed to be measured against the difficult circumstances encountered during that year's count. It took place in the aftermath of the Kaikoura earthquake and a large storm the following day that significantly affected the sediment levels and clarity of the inlet.

"Nevertheless, the increase in cockle population in the inlet's intertidal zone is very encouraging," she says. "The rising percentage of juveniles is particularly positive, as it indicates successful settlement of larvae and potential migration from subtidal areas."

Issues remain, however, related to pollution and sedimentation, which not only threaten cockle populations but also affect overall health of the area.  "While these results are very positive it doesn't mean that all is well with the inlet", says GOPI chairperson Lindsay Gow.  "Sedimentation and pollution continue to be problems and the limitation of the cockle count is that it doesn't reflect the condition of the inlet below the low tide mark."

Greater Wellington regional councillor Jenny Brash, who is proud to have taken part in the survey, as she has done for many years, says it is a fantastic initiative that provides valuable information on the health of the inlet and points towards activity that can help manage water quality.

"Local communities can help improve harbour health by doing things like planting trees, which reduces erosion and sediment entering streams, and where they can washing their cars on the grass rather than their driveways so contaminants do not flow through the stormwater drains into the harbour."

On a broader level, Greater Wellington, in partnership with Ngāti Toa and both Wellington and Porirua City Councils, has been managing harbour health through a joint Strategy for a number of years. The strategy is being updated to incorporate the Te Awarua o Porirua Whaitua Implementation Programme and accompanying Ngāti Toa Statement.  Supporting this event is one of the many activities in the strategy to improve and monitor the health of the harbour.